Performance at Riverside Will Leave You Howling at the Moon

You can’t complain that the only things to do in Vero Beach this summer are playing golf or playing in the water. The Riverside Theatre is alive and well with a broad palette of activities all designed for fun. This past Saturday, for instance, they held their weekly get together on the patio with food, drink and live music that is known as “Live in the Loop.” Then at 7:30, we attended a show in the Waxlax Second Stage auditorium called “Howl at the Moon.” No, it wasn’t about werewolves, coyotes or trying to achieve an impossible dream. It Is simply a terrific, enjoyable evening that just may cause you to howl in delight.

The Waxlax was transformed from a theater into a cocktail lounge with cocktail tables for two or a crowd of friends. Waitresses served from a menu of food and drink, while on stage, two electronic pianos awaited the performers. Then Ken Gustafson and Katie Pinder Brown emerged, sat at their respective pianos and began an evening of great music, all based strictly on requests from the audience with unscripted patter to keep the audience singing, laughing and dancing to a medley of hit songs for the ages. It sounds like it might have been Ted Mack’s Amateur Hour (for the few audience members who know that reference), but it was a polished performance by two excellent vocalists and talented musicians. 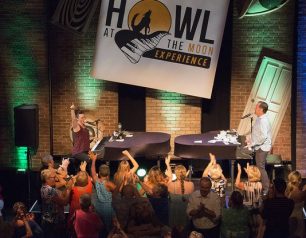 Ken and Katie put megawatts of energy into their impromptu performances, trading lead back and forth depending on the song and making the audience part of the act. Howl at the Moon is almost a musical franchise, multiple troupes putting on shows around the country (and beyond), with different performers at each event. Ken and Katie both live in Florida but obviously get their energy from an interstellar power source. And that was at the 7:30 show, which lasted until nine. They did it again at the 9:30 show!

Meanwhile back at the patio, Riverside presented its weekly Live in the Loop outside music bar. Local favorite Bobby and the Blisters played their crowd-pleasing brand of Mardi Gras-style jazz and contemporary hit music. Food and drink were also available for the evening. It was a blast!

This coming weekend on Friday night (July 1), the band Crooked Creek will play country and pop music. Then on Saturday (July 2), local dance group Swingsation will host a salsa dance party. Admission to every Live in the Loop performance is free (but not the food and drinks, of course). And don’t forget Las Vegas Nights this weekend both nights, also free, with the theatre lobby set up like a real casino!

You must purchase tickets for Howl at the Moon and seating is limited. You can reserve a seat or a table starting at $16. It is recommended that you buy tickets in advance on the website (tickets.riversidetheatre.com) or call the box office at (772) 231-6990.