Howl2GO Dueling Pianos is the ultimate way to make your party and event rock! Our sets always consist of the crowd’s favorite hit songs, so it’s only right that we pay respects to the artists who have made crowds move for years and put out classic music that has stood the test of time. Today, we are taking a look at a release that took place 38 years ago today and changed the face of hard rock music for years to come. AC/DC’s Back in Black came out on July 25th, 2018 and we are still celebrating it today.

Back in Black marked a huge turning point for AC/DC. The Australian rock band was at the height of their international popularity after the release of Highway to Hell in 1979, the group’s sixth album since forming in 1973. However, tragedy struck after singer Bon Scott passed away following a night of heavy drinking. Despite considering a break-up, AC/DC decided to carry on and brought in singer Brian Johnson, who quickly began to contribute to the songwriting process. 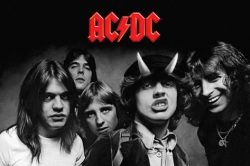 With new material in hand, the band headed to the Bahamas to record at the now sadly closed Compass Point Studios, where the band experienced significant issues due to tropical storms rolling through the area, along with improper studio conditions, equipment being held by customs, and nervousness from Johnson in never having recorded with the band previously. After the recordings were completed, the band headed to New York to mix the tracks at the famous Electric Lady Studios, eventually releasing Back in Black on July, 25th 1980. Though AC/DC was initially nervous about critical reception, the concerns were quelled when the album reached #1 on the UK Albums Charts and led to the band having four simultaneous albums in the British Top 100. It even led to the group’s first Top 40 hit single in the US with “You Shook Me All Night Long/Have A Drink On Me”.

Back in Black’s legacy has only grown, becoming the best-selling hard rock album of all time and the best-selling album by an Australian act. It remained on the Billboard chart for 131 weeks, and has sold over 50 million albums worldwide.

Howl2GO is always ready to make your party shake all night long! Our dueling piano and live music show is full of hit songs from AC/DC to Rihanna and everyone in between. We start planning your set with you weeks in advance, making sure every detail is worked out to go along with your night. Howl2GO’s musicians are all professionally trained to bring showmanship, excitement, and tons of energy to your event, and even show up early to be sure the night gets set up without a hitch.