History of the Keytar

Making a song into an experience means adding a ton of excitement. So Howl2GO Dueling Pianos goes beyond just baby grands, adding drums, electric guitars, bass guitars,and many more fun instruments. One instrument never fails to get the whole crowd roaring—the keytar! Find out more about the strangest instrument we bring to the stage, and how it developed over half a century. 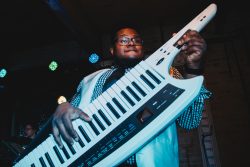 The first known precursor to the keytar came to bed in 1795 with the creation of the Orphica, a small-board piano with a harp attachment and a neck-like grip. The design stood until 1963 when German manufacturer Weltmeister created the Basset, an electric bass piano in keytar shape. Neither of these designs gained much popularity, but the keytar would finally begin to earn a reputation with the Joh Mustad AB, a tubular shaped electric organ with a half keyboard and controls on the neck. The intrigue began to build once Paul McCartney and Kraftwerk were noticed using the AB in the late 1960’s and early 1970’s.

The first keytar to be exhibited at the NAMM convention, the biggest yearly display of new achievements in musical instruments, was the PMS Syntar invented by George Mattson at the Atlanta 1979 exhibition. Though radically different from the keytars we know today, the Syntar opened the door for manufacturers to create and improve on designs, leading to other popular models of the time like the Hillwood Rockeyboard RB-1, the Royalex Probe, the Roland SH-101, and many more.

The clear winner of the early 1980’s, however, was the Moog Liberation. This board was an absolute game-changer, featuring two oscillators and a polyphonic organ system, plus a neck with wheel controls for filter cutoff, modulation, and volume plus a ribbon pitch bender. DEVO clung to this unit, and as the band’s fame grew, the Moog Liberation caught on with the industry. Soon, manufacturers like Korg, Yamaha, Roland, and more created the units that would catch on with the glam bands that would define the era. 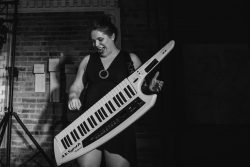 Howl2GO’s lead performer Emily taking a solo on the keytar

As tastes in music changed at the tail end of the 1980’s and into the 90’s, the reign of the keytar ended and the instrument was all but extinct. However, as musical preferences began to change again between 2000 and 2005 with bubblegum pop, ska, parody acts, and nostalgic groups, the keytar had an audience once again. The popularity of artists like the Black Eyed Peas, No Doubt, Flight of the Conchords, and Motion City Soundtrack created a demand for new, updated keytars. Manufacturer Roland quickly swooped in to dominate the market, releasing a slew of models including the Roland AX-7 complete with an expression bar, pitch bend, sustain, volume controls, and more. They added to the line with models like the Roland AX-Synth, which included a built-in synthesizer, and the Roland Lucina AX-09 that added USB capability. Other popular keytars today include the Alesis Vortex Wireless 2 and the Mad Catz Rock Band 3 Wireless Pro Keyboard. 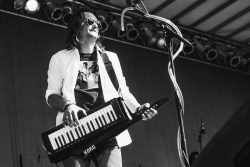 Howl2GO Dueling Pianos makes parties and events all around the country feel even more extravagant. Every one of our performances feature our legendary dueling piano show, with Howl2GO’s expertly trained musicians bringing a ton of energy to the stage. You can even add more musicians on drums, guitar—and even keytar—to the mix for an experience like no other. Either way, we’ll play hit songs and plenty of crowd requests all night! Howl2GO’s staff starts planning your night early to ensure the perfect performance, every time offizielle website. We even bring every piece of equipment with us and set up early so everything goes off without a hitch.