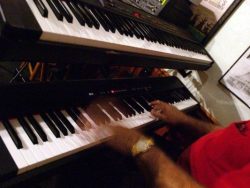 Looking for a fun job?

Howl at the Moon, the audience participation show at Riverside Theatre every other weekend, is looking for people who can carry a tune while accompanying themselves on the piano.
To audition, you will need 10 songs memorized, in a variety of styles, covering several decades.
If you make the cut, you would build your catalog to 30-40 songs, all memorized. 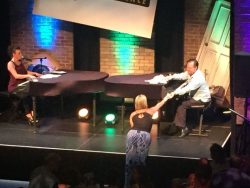 Howl at The Moon Experience at Riverside Theatre is a high-energy music show. Howl at the Moon has clubs in several nationwide cities.

Your ultimate goal will be 100 songs, but Ken Gustafson, a Howl performer and the guy who hires the talent, said that is not the end.

“Once you hit that number, you are required to keep learning all the new songs that are hitting now, and keep yourself culturally relevant with your humor.”

And learning songs and playing the piano isn’t enough.

“You have to learn bass, drum, and guitar parts for other people’s songs, all memorized,” Gustafson said. “The goal is memorization so you can engage with the audience. Interaction is the key to our concept.”

Gustafson, says he looks for candidates “old enough to know all the songs that will work, even for 21-year-olds, but young enough to still go out and give 110 percent and wow everyone in that room.”
If being in the audience is enough for you, Gustafson shared some tips for getting your request played.

“We get inundated with requests, so maybe add a dedication, say why that song is special. The more information on the request slip, the better the chance we will play it.” 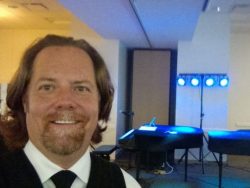 Ken Gustafson with Howl at the Moon, the audience participation show at Riverside Theatre every other weekend, is looking for people to audition for the show.

Howl at the Moon has clubs in many cities, but when Gustafson started with Howl in Coconut Grove, there were only four locations.
Among his other duties, he is Howl2GO coordinator for the Florida region. Orlando is the training location for Howl’s newer entertainers, he said.

“All the players used for offsite shows are the highest caliber musicians with the largest repertoires to handle any room,” even when things veer a little off course.

He remembers a request to sing the national anthem with his trousers down, not the norm for a Howl show. The audience was up for it, and everyone got into the spirit, “standing, singing, and cheered wildly at the end,” Gustafson said. That was the good news. Unfortunately, that was the first time his mother decided to see what he was doing for a living. “Mom was not happy.” 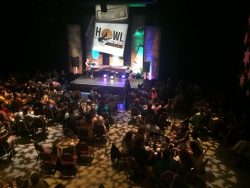 The Howl at the Moon experience, an interactive dueling piano show, draws crowds to Riverside Theatre in Vero Beach.
Gustafson plays accordion, piano, bass, drums, guitar, and ukulele and says next on his list would be the mandolin, fiddle (not violin), and hammered dulcimer.

Of those, the piano is his forever instrument. “Every note in the orchestra is available. The notes always stay in the same place (unlike string instruments where there are several ‘positions’ to play the same note).” He also has a repertoire of jazz standards that you won’t hear at Howl. Maybe a request would work.